let's talk about it

It should appear on their web page shortly, but here's the text: 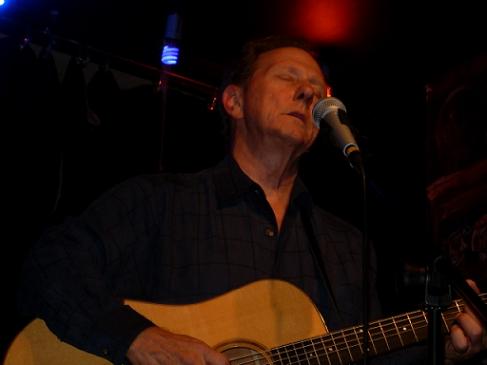 photo: Sher Fishman
An evening to cherish
By Betsy Graber

Bob Lind gave a killer performance in March at the Luna Star Café, that little oasis in North Miami which survived years of struggle to keep the arts alive. Accompanied only by his acoustic guitar, Bob Lind sang from his heart and soul to a packed and enraptured audience with stunning renditions of songs written over 40 years; songs played at the Luna Star Café more recently, and with songs waiting to be officially released.

Creative, romantic, spiritual, visionary poetic songsmith; these are several descriptives found in reviews to describe Bob, his music, and his talent. It's difficult to peg Bob, and just when you think you have figured out what he’s thinking, he cuts you short with a laugh as if to say it's none of our business; just enjoy the song.

The night was pure magic filled with anecdotes and tongue-in-cheek self-aggrandizing banter.

"Mr. Zero," written more than 40 years ago; a collage of visual scenes, brought a special round of applause.

"Wearing You," written or recorded in 2005, was spell-binding as usual.

And we can't leave out the tender "Theme from the Music Box," “They don't go by for nothing, these moments.” Let us all cherish the fleeting moments in our lives.

The melody to "How the Nights Can Fly" is beautiful, and Bob’s tenor voice, coupled with a strong falsetto and perfect pitch, brought the house down.

"Perspective," written in 2007, has become one of my favorites. This song could be the title of Bob's next album. It would make a great duet. His beautiful chord changes remind us that this is Bob Lind. This is the guy who wrote "The Elusive Butterfly of Love," "Cheryl’s Goin’ Home," and "How the Nights Can Fly."

This is Bob Lind, whose songs were recorded by more than 200 artists.

This is Bob Lind who has written several books. Noted documentary producers Paul Surratt and Ian Marshall are busy shooting a documentary about his life and work. It should be out in early 2010.

This is Bob Lind who plays the keyboard and tenor sax.

With his excellent guitar picking and strumming, thought-provoking lyrics and haunting tunes, Bob rocks! Not to fail to mention again his excellent stage presence and how he works his audience.

This is Bob Lind, the consummate performer.

The playlist from Bob Lind’s appearance at Luna Star is available upon request.

Return to “Keeping track of time”